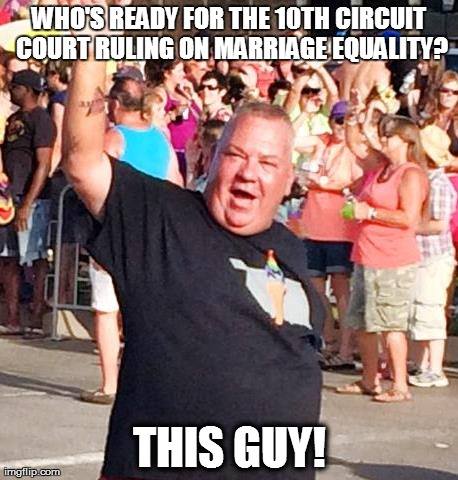 Oklahoma State Representative Sally Kern is foaming at the mouth again. She declared it “horrific” that this week’s ruling that California’s ban on same-gender marriage is unconstitutional.

After I gave an interview on KTOK Radio this morning, she told the station that “homosexuality is a behavior and the question must be asked whether all behaviors are equal. This is a behavior and it’s a behavior that has been proven scientifically and statistically to be a deadly behavior.”

Of course this is nonsense. One’s sexual orientation is not a behavior. That’s akin to saying Sally’s brown hair is a behavior. Sexual orientation and gender identity are like height, eye color, right handedness; they are all part of our makeup. But we shouldn’t expect truth from Sally.

The website examiner.com reported earlier that Sally said gay marriage is a form of “debauchery like abortion, pornography, sex trafficking, divorce, illegitimate births and child abuse.” She even went so far as to blame gay marriage on the nation’s economic woes.

And we all remember when Sally said that LGBT folks pose a greater risk to the United States than terrorism.

Friends, you can’t make this stuff up. This is the reality of where we are today.

I heard a syndicated radio host last night talking about a revolution because “activist judges” are not abiding by the will of the people. Odd, isn’t it, how only those judges that make rulings not in line with ultra conservatives are labeled as activists.

If decisions of equality were left up to the will of the people, African-Americans would still be riding at the back of the bus and women would still not have the right to vote. If it truly is the will of the people in this country to deny rights to others and to provide one level of justice for some people and another level for others, then we’ve no choice but to continue our procession to the courts.

The claims that allowing same-gender couples to marry violates the institution of marriage mystifies me. How in the world can my being married to another man impact negatively the marriage of a straight couple? Allowing two men or two women to marry, offering them the same rights as any other couple, strengthens the fabric of this country.

Ultimately, though, this is not about marriage. It is about unequal treatment. It is about withholding rights. It is about denying liberty and justice and the pursuit of happiness to millions of Americans.

And this takes gay marriage from a gay issue to a human rights issue. Every good person, regardless of sexual orientation or gender identity, has a moral obligation to stand firm for equality for all people. We need every LGBT person and every family member of a lesbian, gay man, bisexual or transgender person. We need honest legislators with integrity and pastors with compassion. We need educators and journalists and attorneys who will not back away from what is right. We must work together, speak together, march together, vote together, and love together.

It’s Much More than Marriage